and up the line.

Quite uneventful really, I have this feeling I can move the CG back, as well as the tow hook.   Will have to see if that happens in 2017 or next year.

The sky was grey and overcast, 1st flight 8 minutes, 2nd Launch got me a 5 minute flight. I was rather surprised actually, thought I would be back in the hanger sooner then that

No matter where you are , there’s definitely no symmetry about the graphics

I just stuck this together, the boom is held to the pod with some masking tape, and I am treading gingerly with this plane.

Then there are builders , I understand that string , tape and CA can be used to hold servos in , but why anyone would do this is beyond me especially when the room is there.

Sure this method may survive a nose in from 500 ft, but really?

A little pride, it’s not a foam plane, or am I just a little old fashioned and OCD 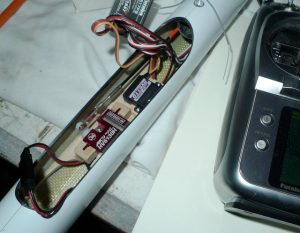 some blocks and screws and the string is gone

I’ve done some mods, removed the switch in the process, and flipped the stab servo, the clevis  now lines up nicely with the servo horn

The next Day, bright , sunny, but cold .

Something about the boom and the tail feathers bugged me yesterday. Partly why I didn’t glue the boom to the pod.

The problem with gluing the boom is of course getting the boom correct in a couple of planes so it flies straight , and the wing incidence is accurate with respect to the elevator

However the fin/ rudder did not look square to the tail.

Have a look at this picture, the rudder/ fin is leaning right  in my eyes.

So I can rotate the boom to set the fin vertical or the stab horizontal. Huum

Either way I loose or

A Couple Options I see

Not sure where the issue is yet, but as the fin sets down with a couple rods to the boom, and the elevator is held down to the saddle with a screw. I will be looking at rotating the elevator slightly

Looking aft, there is a gap perhaps 3/16 inch at the top of the square edge.  Not good.

View looking forward left side, the square is fairly tight to both the fin and the elevator

Looking for some symmetry

The rear post is hollow and sets into the perch on the rear of the boom, and up into the fin, larger hole on fin root, The smaller hole picks up a small CF rod that is in the forward portion of the perch

This is the perch with the rear hollow cf tube in place . Forward is the top of the link which gets screwed tight to the moveable portion of the elevator , forward is a conical casting which fits into a corresponding dimple in the stab, and the center is threaded for a screw 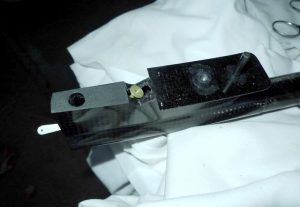 Here is the perch from the other side, and you can clearly see where the elevator sets. This area is what I will focus on to better set the relationship between the elevator and the fin. To adjust the holes and the tubes where the fin affixes to the boom would be much more problematic

I am going to have a look  with a bucket full of  shims, that will bring the right side of the elevator higher, Perhaps .005 to .010 inch or so, will see

Added a shim at the perch for the elevator

Top of the elevator, the forward tube locates the stab , then there’s the CSK screw in the middle, use 2.5 MM allen Key, and at the rear is the small screw that picks up the elevator linkage from below.